Not the singing group but a whole bunch of new teams. The Middleton, Strawberry Crest and Wharton High School teams are all stocked with new drivers and pit crews this year.

All the new teams had good a day on the track at the HCC Brandon Campus. Other than the normal flat tires there were no problems other than when three cars were trying to fit into the space for two cars and Middleton took out some of the cones.

Race day was a question mark with the weather looking rather questionable early.  The first race was delayed for 30 min. for conditions to improve.

The Brandon #9 was all set to start to defend its 2013-2014 Championship against its Tampa Bay Tech #242 nemesis.   During the first race things were close till midway through the race when Brandons #9 lost power and finished in last place.  Turns out that the motor control computer was not set up properly with the under volts cut off set to high.  They didn’t have their laptop to reprogram the controller so the #9 was out of contention for both races.

TBT ran two strong races taking first  in both and 1st place overall in the High School class.  A good start for their Senior driver Brady.  TBT should have a second car ready by the next race.  The Science Club will be running one of the old USF cars by then.

The Brandon #14 car finished a close second in both races and 2nd  overall in the High School class.

Now for the New Kids On The Block.  The surprise of the day was Middleton.  With the redesign of their car they finished a strong 3rd in the first race with 85 laps.  With brand new drivers and a redesigned car they will be a team to look out for.  In the second race the battery bug bit them and they finished last.  They were passed by a snail on the last lap but were able to complete the hour. They only have one set of old batteries and couldn’t get them fully recharged between races.  Better batteries and look out.

Strawberry Crest and Wharton both had all new drivers and pit crews.  Both ran steady races with both teams getting bit by the tire Monster.

Strawberry Crest also had a great pit stop area set up with burgers and drinks for all during the break between races.  It was much appreciated by all.

The Wharton pit crew did a fantastic job on a tire change.  The worst tire to blow is the drive wheel because you have to dismount it from the chain and fork then readjust everything.

In the Open Class Tiger Racing with Rodney at the wheel took up where he left off last year, winning it all.  The Electrocutioners #90 took second overall for the day.

The HCC team with a lot of new members ran two strong races.  They were just two laps out of second place in the first race.  They got bit by the Tire Monster too in the second race and finished off the pace.  HCC is looking good for the start of the year.

The Electrocutioners #8 running Lithium Ion batteries is in a class by itself, literally.  Drew had the top lap count in the first race but had steering problems in he second race and had to withdraw.

The next race is Nov. 1st at Strawberry Crest High School.  Weather should not be a worry so we look forward to more teams competing.

As the start of the new school year is upon us here is some exciting and important information.

SkillsUSA competitions are held during the week so no weekend racing.

When talking with Dale Fasenmeyer, the District Rep for SkillsUSA, we talked about requirements for Electrathon Clubs to participate.  The take away from the meeting is SkillsUSA = S.T.E.M. = Electrathon.  That means just about any program with an electrathon car is eligible.  High School and Post Secondary

Electrathon Of Tampabay will be holding a meeting in August and the regional SkillsUSA will hold an organizational meeting in Sept.  I will be at both meetings so stand by for more detailed information. 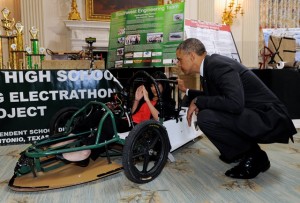 Pres. Obama and Electrathon car from San Antonio at the White House Science Fair.
This car has competed at the Emerald Coast Electrathon at Five Flags Speedway at Pensacola Fl. 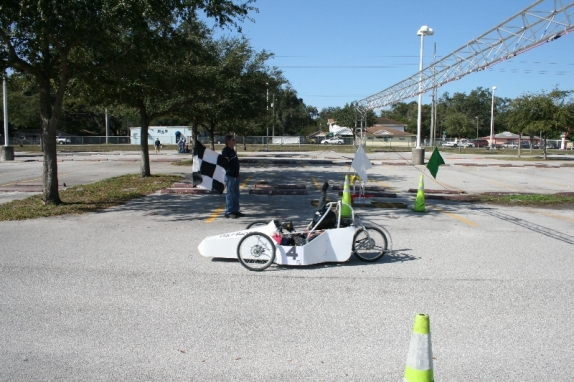