One of the goals of Electrathon Racing is How Far Can You Go in One Hour on One Set Of Batteries.
On the 1/4 mile track is where you can find out. Aerodynamics come into play here more than on a road course. Gear ratios are the other big factor. Too high and you can kill the batteries. Too low and you cant keep up. The wear and tear on the cars is less but tires need to be 100%
ATTENTION TO DETAIL.. one problem or one oh …. and you are out of it. Make sure your mirrors are set up so you can see the car coming up on your 6.. You MUST be able to see cars coming up on BOTH sides. Min. of 8 sq. in. If you can see both sides with one mirror. Two are better.
The weather for this Sat is looking good. Not too hot and no rain. 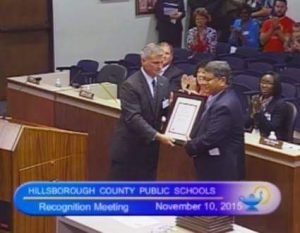 On Tuesday, November 10, 2015, The Hillsborough County School Board will present to Ken Fiallos (ETO Founder) the 2015 STEM Champion Award. The ceremony starts at 530pm and will be held at 901 E. Kennedy Blvd in downtown Tampa. Please come out and support Ken and our organization (ETO) at this recognition ceremony.

Our next race will be at Middleton High School, located at 4801 North 22nd Street, Tampa FL 33610. The Middleton Team will be selling food as a fund raiser for their teams, one of them is an ALL GIRLS TEAM, the only one in the entire State of Florida. The course will be an oval with two areas on the back straight away that has cones to make a simple serpentine for drivers to navigate through. The green flag for the first race drops at 10am 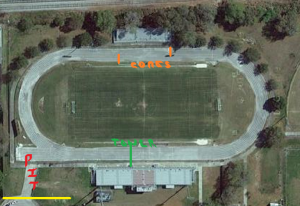 and drops again at 1pm for the second race.

The second race of the season went well. Our host, Strawberry Crest Electrathon Team with Sponsor Jim Brockman provided great food and drinks along with a challenging course. We started the race with twelve cars under the direction of our founder Ken Fiallos. Many drivers thought the drivers education range would be that simple little oval with an inset. This course challenged drivers with an inset on both ends that were not the same. Cones flew on a few occasions as the turns took over the car and away from the driver. All safety barriers proved to be effective making all drivers safe during both races. A special thanks to Tom Beck for filling in as our Race Stewart for the day. 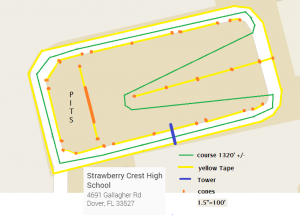 The second race of the season is coming upon us quickly. The Strawberry Crest High School Team will host the race for the very first time. Jim Brockman (Sponsor) has done a great job getting this approved at their site for his team. Lets show our appreciation to them by having a great turn out and a safe race. The track will be set up on the drivers education pad located on the NW side of the campus. The course will be similar to that of the drivers education pad at Tampa Bay Tech as seen in the diagram. The flag to start the first race will drop at 10am followed by our second race at 1pm.

Some observations while doing pre race inspections and between races in the pits.

ATTENTION TO DETAIL. ESPECIALLY THE LITTLE THINGS can be the difference between 1st and 5th or a DNF.

Proper wire size, connector size, insulation and a loose connection caused the HCC car to blow the controller. The cable ends going to the controller were/are way to big and not insulated. One came loose and shorted out the controller. That was the end of the day for HCC. The cable end should be JUST big enough to go over the copper conductor. Soldering them is even better. Check with any auto parts store and get HEAT SHRINK TUBING for your connectors. That way even if they come loose they should not short anything out. The right size connectors and proper insulation are way cheaper than a new controller or other pieces of equipment. Teams that have done these things have almost no electrical problems.

I know every team has a copy of the Electrathon America Handbook handy for all those questions on batteries, wiring, car design and safety. Every one should be up on everything it contains. If you don’t have a copy go to electrathonamerica.org and download a copy.

On car design: On the wheel spacing, wider is better. If you can’t make the wheel spacing wider then camber adjustment can help. A low driver position is better than a more upright position. Low center of gravity is VERY Important. Weight distribution is critical. (Is that ballast going to come loose or move during the race or if you get in the grass or in a crash or when rubbing paint with another car?) If all of these items are correct the car is very stable and not prone to tipping, spinning out or going upside down. So take a close look at your car and keep the shiny side up.

The above items will help you keep the little things from jumping up and biting you in the butt once the green flag drops.

The first race of the new season saw a dozen cars take the green flag at 10:00 A.M. Teams in the High School and Open Classes starting the year were Brandon H.S. with 2 cars, Tampa Bay Tech (TBT) with 1, Middleton H.S. Girls team (The boys couldn’t get their car back together in time) Simmons Career Center (Their first race) HCC, USF, Robinson Racing (with one car) and Rodney with Tiger Racing.

In the experimental battery class was Cliff from ProEV in the 39 car and the Electrocutioners with Drew in the 72 car and Miss Electrocutioner Pony Gradert in the 8 car. Drew and Cliff battled hard in both races with Drew taking both races by one or two laps for a record total of 220 for both races. All the experimental battery cars had flawless races. In past races they have had problems making the tires last the whole race.

The HCC team gets kudos for sponsoring such a excellent race and providing drinks and snacks. They did have a problem with their motor controller, their second in two days, when the magic smoke escaped from it. Seems there was a problem with a loose battery connection to the controller causing sparks and other unneeded problems. Not having another controller handy, they were done for the day shortly after the start of the race.

There were other problems with loose or bad connections during the day. The gremlin bit the TBT team when one of the battery cable clamps was bad and caused battery problems during the first race causing a 5th place finish. In the second race they got it fixed and finished 1st.

Middleton finished a strong second in the first race but had the connector gremlin bite them in the second race causing them to lose a lot of battery power.

Simmons Career Center in their first race ever had a good outing in the first race with 80 laps before the batteries went down. The electrical gremlin caused problems for the second race. We look forward to seeing them at future races and are excited about them hosting a race in December.

Brandon set a record for busted wheels and busted forks with the 9 car having one wheel go bad and then another collapsing. The 14 car had a weld break on the steering fork and had to withdraw early in the second race. Both cars had successful demonstrations of the roll cages with some paint scratches the only visible signs. We are excited to see them back on the track this year.

Rodney was testing some new motors and verified that the first one was not up to the task. There was that burnt electrical wiring smell on the front straight as he went by late in the race. In the second race he used another motor and his lap count was way up without that burnt wiring smell.

Check the schedule for future races. One note for the Middleton race, We will be on the 1/4 mile running track so get your drafting gear ready.

Teams should arrive early.  Since this is the first race of the season we will be doing an extensive inspection of the cars and drivers.  It will include drivers bailing out and brakes and steering.

The track is a 1200′ plus rectangle and one of the smoothest we run on all year.  Just watch out for the water hazard on the north side of the track.

At the start of a new season there are a few questions floating around.

Who will take Bradys place as the lead driver for TBT?  Will Brandon be back as strong as they have been in the past?  Who will be the lead driver for Brandon?  Will the girls from Middleton be as strong as they were at the end of last year?  Who will be the new driver for Foundation Academy?  Will we see Strawberry Crest come back?  How will Wharton do this year?  Whats with the Electrocutioners getting a third car number?  How will the HCC team do on their home track?  Will Rodney be able to repeat?  I hear he has been making modifications to his car.   Will the experimental battery class get bigger this year? 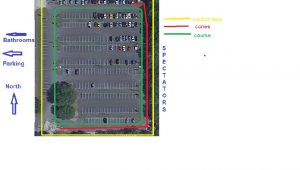 Bring your friends and come on out to the races.  No hearing protection required.

FAMILY, FRIENDS and RACE FANS JOIN US AT OUR FIRST RACE
Our first race will be held at Hillsborough Community College, located at 10414 East Columbus Drive
Join us for a day full of fun for the entire family, free admission
The flag to start the first race will drop at 10am and the second race will begin at 1pm

Vaughn Nicholas advised us that the date for the Five Flags Race will be either the 2nd or 3rd weekend in April. Five Flags will not set the date until their current race season is over in October.