ETO thanks Susan Schleith of the Florida Solar Energy Center for inviting us again this year to their annual event.

A special thank you goes out to Lillian for everything she does each year for ETO.

Another special thank you goes this year to Kaileen (Susan’s daughter) for taking all of the pictures.

Here are the photos of the Energy Whiz Olympics, Junior Solar Sprint and more:
https://drive.google.com/drive/folders/1rO6-lhn4uFLnvBjBBJFQ0VDmdyLylAY5?usp=sharing

What a great day of racing. The open class had a rough day, the three cars in the class all ended their race day before the first race was over. Tiger car 4 (Rodney) never left the pit area after coming off of the truck, possible blown motor controller. ETO Car 60 (Brady) had a rear wheel collapse in one of the turns on lap twelve. 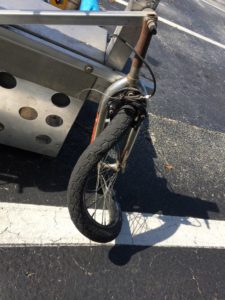 Silver Bullet/Robinson Racing car 94 (Jim) had a little scraping noise as he went around the track, a little louder each time until he finally bottomed out due to a grade 8 bolt that sheered off causing the front suspension issue and put the front end on the ground.

At the end of the first race, it was Ryno Racing car 365 (Ryan) beating USF car 48 (Sai) by seconds in the Advanced Battery Class as both cars had 79 laps. USF car 132 (Stephen/John) finished the first race with 53 laps and no broken parts. In the Open Class, that had all the issues, Silver Bullet/Robinson Racing car 94 (Jim) barely beat ETO car 60 (Brady) by 2 laps. In the High School Class, Mulberry car 38 had a 23 lap win over Simmons car 35. Brooks DeBartolo car 55 remained in the pits the entire first race with mechanical issues. But the race day was not over for those teams with running cars. 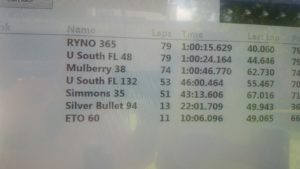 In the second race, all Open Class cars stayed in the pits.
The Advanced Battery Class was at it again, racing for the win of the day. USF car 48 (Sai) took the win the second race by three laps over Ryno Racing car 365 (Ryan), USF car 132 (John/Stephen) only completed 12 laps as their tires finally said enough, no more racing this season.
In the High School Class, Simmons car 35 met the challenge after their 23 lap loss the first race and beat Mulberry car 38 by 31 laps, Brooks DeBartolo car 55 got on the track and had numerous tire issues, but finished with 26 laps. 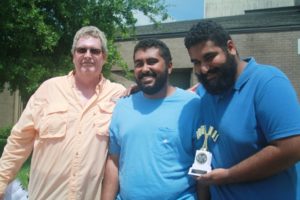 Electrathon of Tampa Bay will have their 2019 – 2020 Race Season posted soon, there are a few locations still finalizing the details for their race day.